Spring Cleaning: Our favorites from 2018

Winter may have outstayed its welcome, but like an awkward guest who won’t take the hint when the pleasantries have run dry, it’s time to show winter the door. Brighter days are ahead and we're excited to emerge from our caves to share what we've been up to. Except for Philip. He's been eating taquitos all winter so he might just hibernate until mid-summer.

It's funny how the thing I'm the most proud of is something 90% of the viewers won't notice. A short film for a client focusing on a dancer learning to find the drive in her life sounds like a simple enough project: Great camera work, brilliant acting and choreography, a powerful score and songs, and visual effect shots hidden in plain sight. I don't want to go into the details here of what was done, but contained in this 15 minute short promotional piece are over a half dozen tweaks, adjustments, additions, and subtractions that all helped make the piece come together in the end. It might seem silly to be proud of something that no one will notice, but knowing my work helped bring the piece together and achieve the client's vision is what makes it all worthwhile.

2018 was the year where I was able to take a more active role in overseeing a project from start to finish and a short promo video for a money savings program called "CookieJar" was my proudest achievement. Being in control of meeting with the client, writing the script, creating the graphics and the animation to go along with it, working with the voice over artist, and editing the whole thing together on time and under budget was a real eye-opening experience. It's not the most complicated commercial, it doesn't have explosions or VFX shots, but at the end of the day I made it from scratch all by myself and I'm happy to showcase it as a representation of me and my skills.

One project that I am very proud of (and finally almost done with), is taking on the task of cutting together 13 different videos of 13 different people’s interviews. Three challenging elements of cutting these videos were:

This project was very time consuming, but being given creative freedom over nearly all elements, and leaving the client satisfied, left me feeling very proud of the hard work. I am especially proud of the first video in these series cut involves light pollution and the night sky. 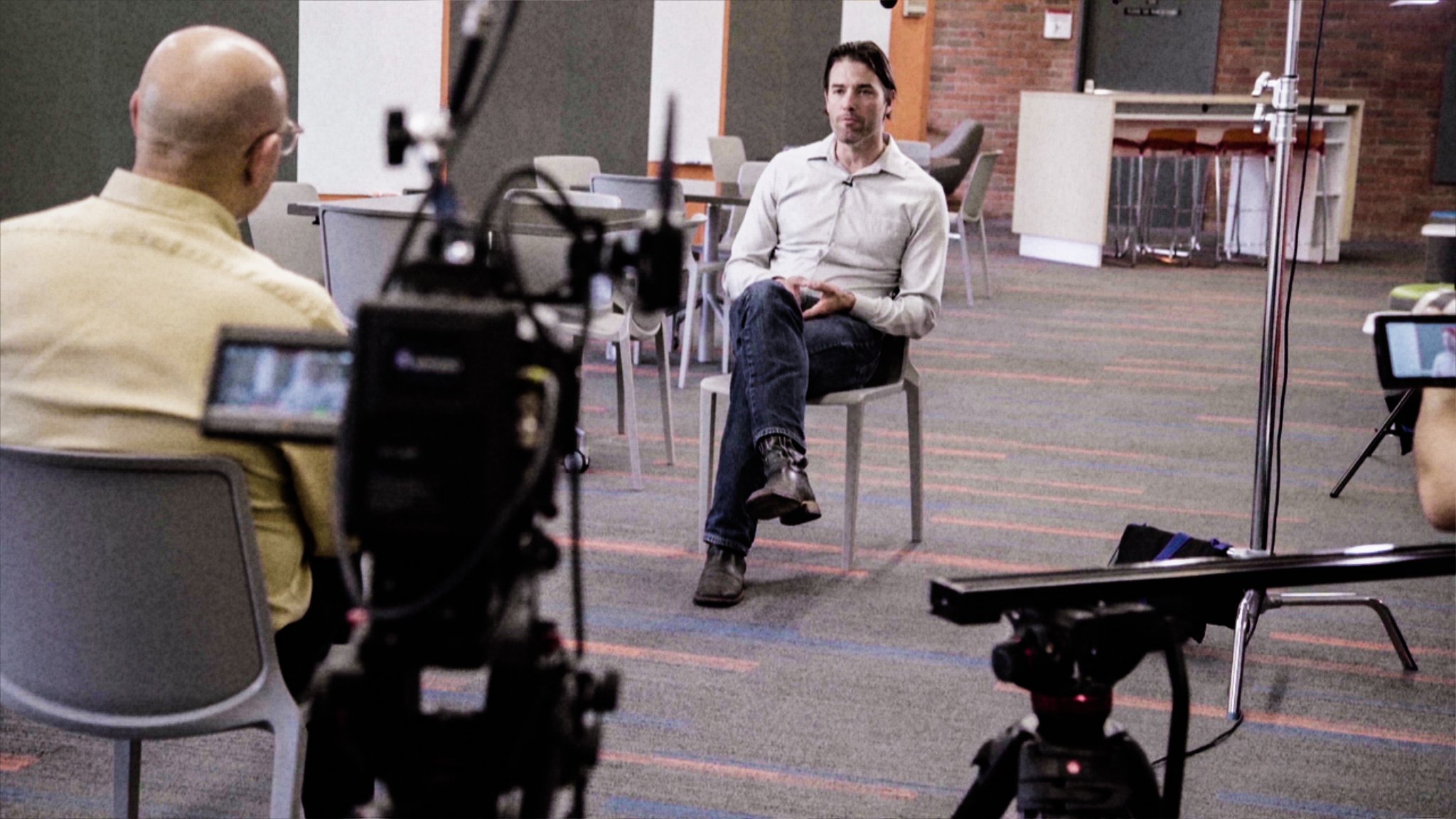 Another project I am very proud of is the St. Cecilia documentary. I never thought when I started at Backflip that I would be handed year's worth of footage and be told to make a short documentary. I was initially intimidated by the sheer amount of footage and interviews to dig through, but got comfortable real fast as the story began to unfold. The cherry on top was finding archived footage of an old Wisconsin Dells tour video that served as exceptional b-role. Thanks to John and Jeff for helping me throughout the process! 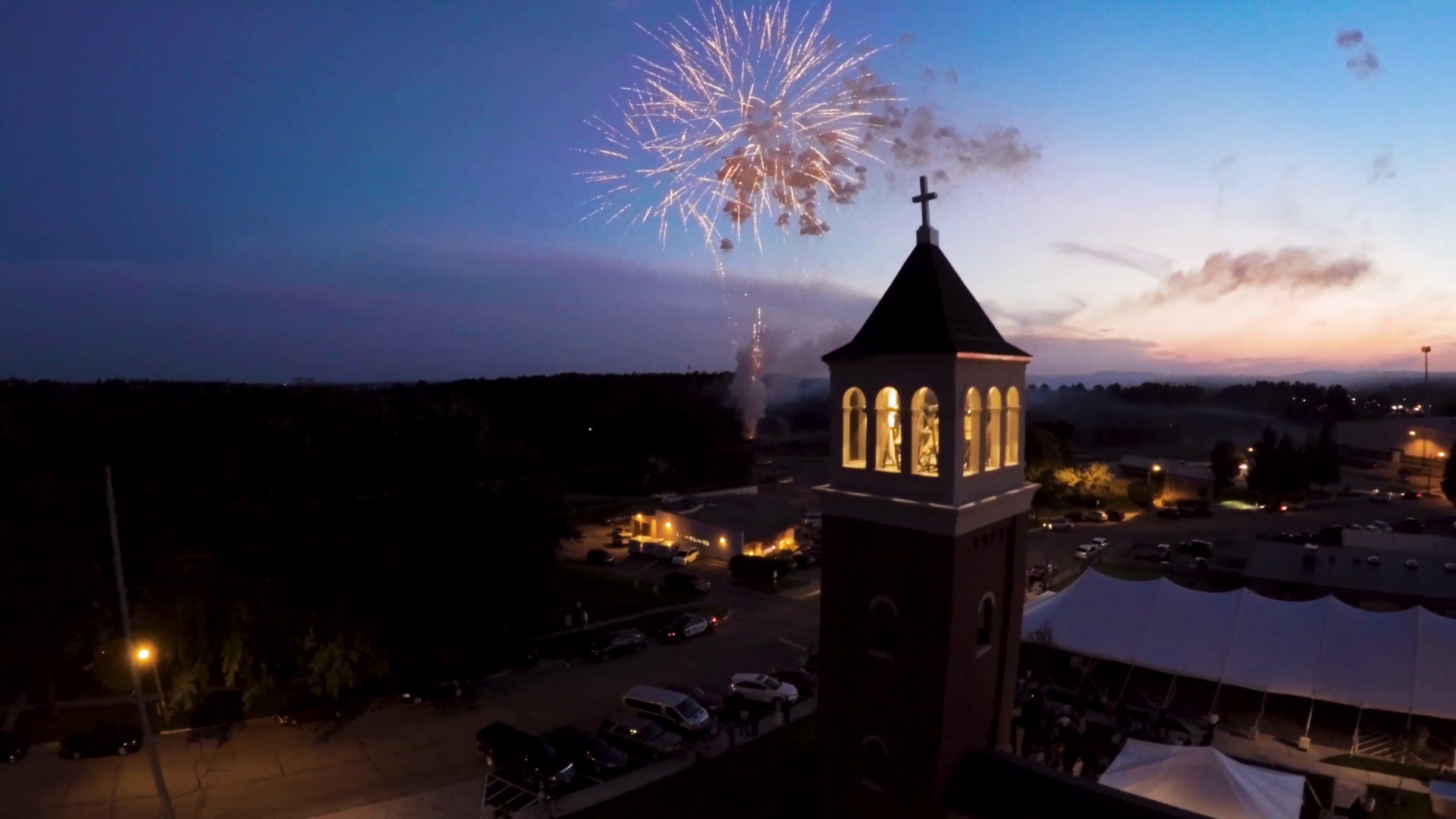 1. Creating an inspiring short film for a client

Last year we produced a short film for a client that was epic. We had dancers of various styles, vehicles, and anamorphic lenses. We were able to work with some of our favorite crew, like cinematographer Jordan Post, and John and I co-directed. It tells a great story which was a huge collaboration to create. We also did a bunch of custom music composition and got to sing in the final number which I hope people will love. We can't talk too much about it until it releases (spoilers) but keep your eyes open for it! 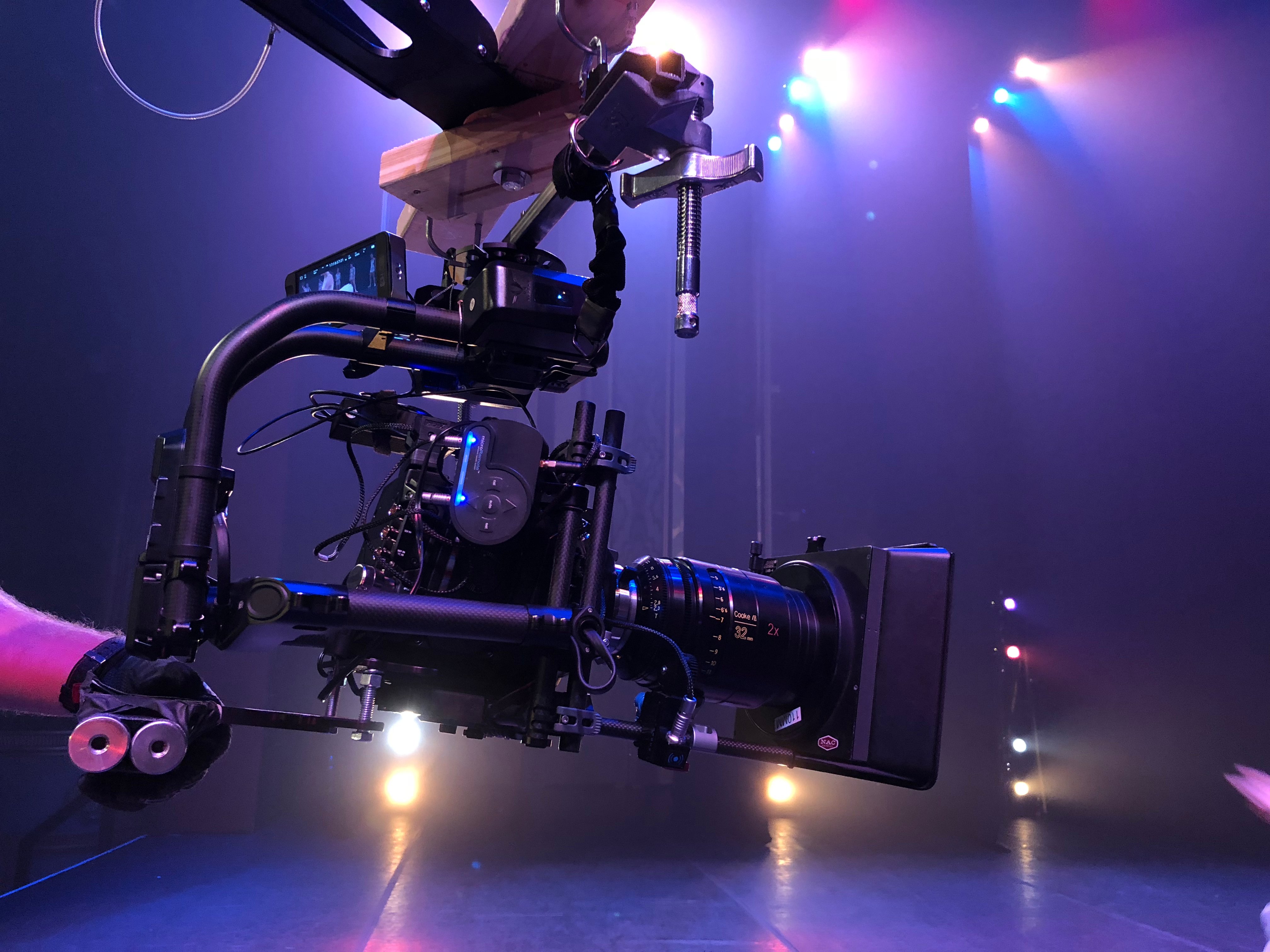 Another accomplishment for 2018 is connecting with some amazing web clients. We've started working with the Archdiocese of Los Angeles (Called to Renew, and Catholic Schools) and the Archdiocese of Detroit (Unleash the Gospel). The best part is that they have great goals and needs and are open to our creative approach! We've begun several projects with them where they bring the messaging and we create the art. We're creating some power, beautiful stuff, and we've had to expand our web department to keep up with the demand! (Check out our careers page if you'd like to help make awesome websites)

Last year we were talking about completing the thing, but it actually has released! We went to a big premiere in Milwaukee with tons of people (we may have taken a limo bus). Now the film is available to order! You can get a copy here: http://powerinmyhandsthemovie.com/purchase/ (not a website we made).

I'm most proud of the website we built for the Archdiocese of Los Angeles' upcoming capital campaign: Called to Renew. We built a really beautiful site that is highly functional and customizable, and did it on a very aggressive 2-month timeline. 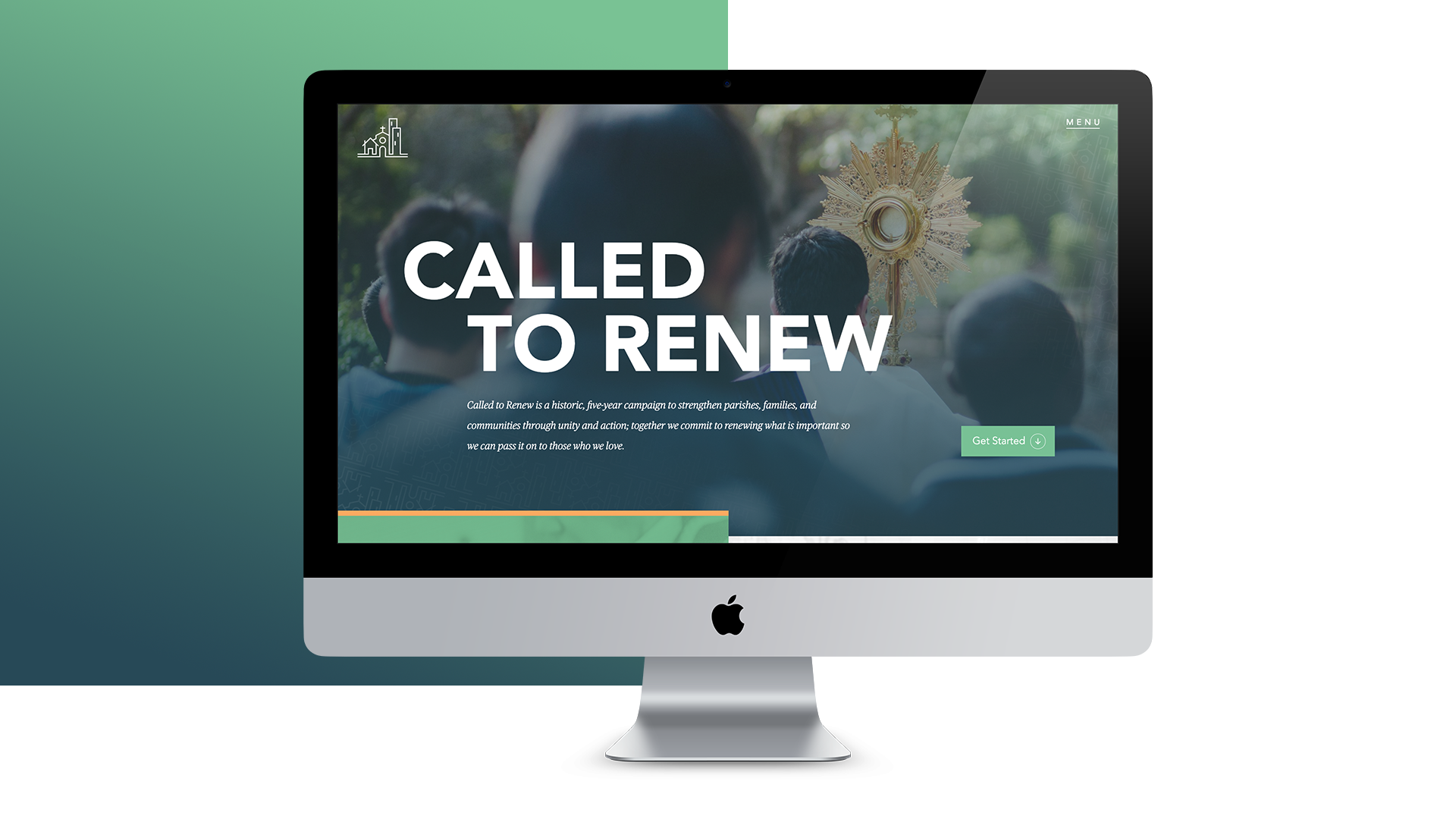 I'm also excited that we won another Judge's Choice at the Addy Awards, this time for the Karben4 Ugly Christmas Sweater. The project was originally conceived last year, but it was too late in the season to have it done before Black Friday. However, they loved the idea, so we targeted 2019 instead. It was worth the wait! 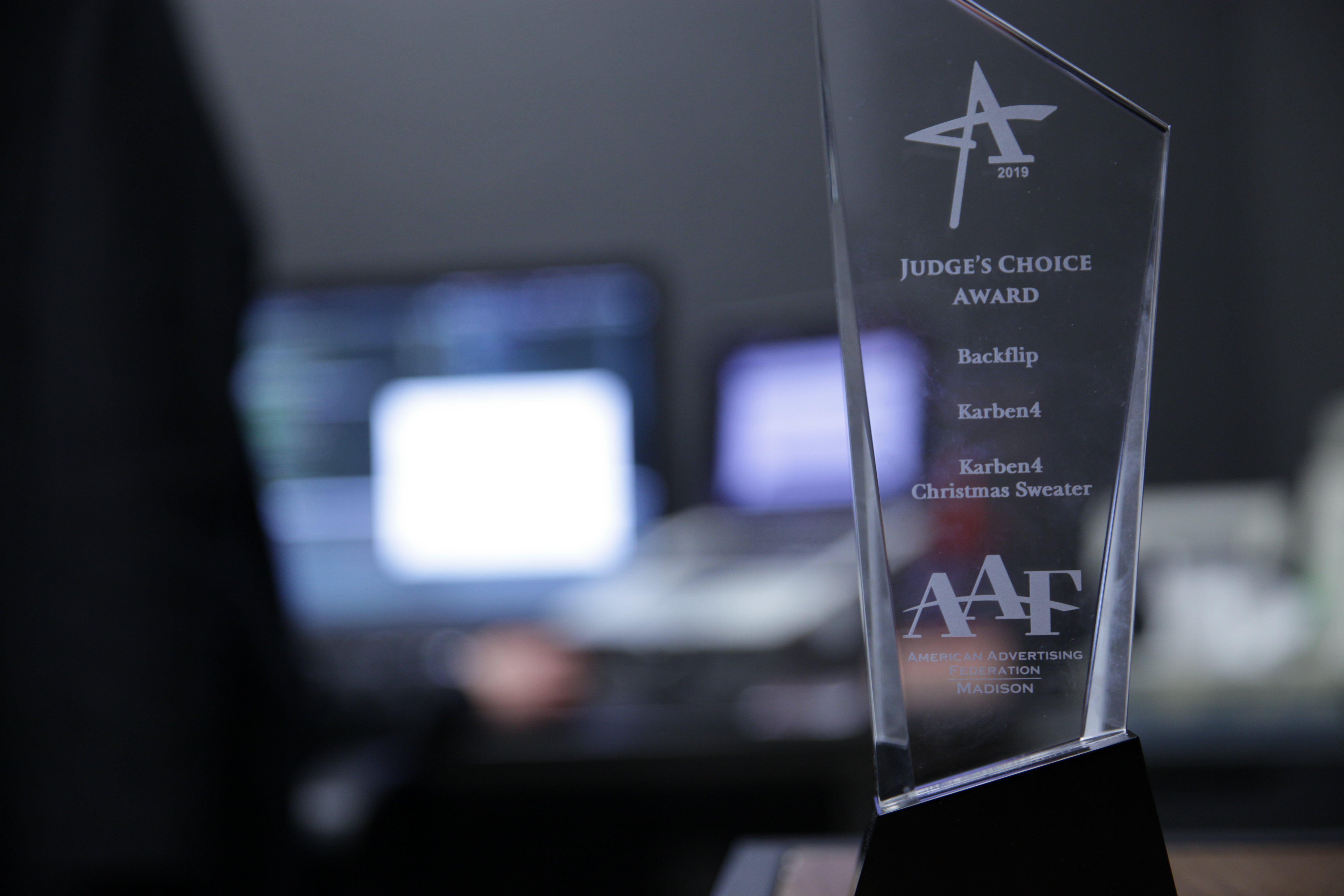 My number one accomplishment this year has been all the camera work I've been able to do. I had a blast shooting a sizzle style piece for St. Paul's. I was able to travel with John and Scott to several universities in Ohio as a B cam op. We did several live production gigs this year that had me shooting b-roll or working as a camera op. I also just DP'd a project for Backflip that you should all be seeing very soon.

Another one of my favorite and most challenging projects I worked on this year was our kitchen remodel. It definitely wasn't a very filmic venture but I did learn a quite few things. From tiling for the first time to making custom floating shelves to painting cabinets, it was a great accomplishment turning Madalina's (somewhat crazy 😜) vision into a reality. 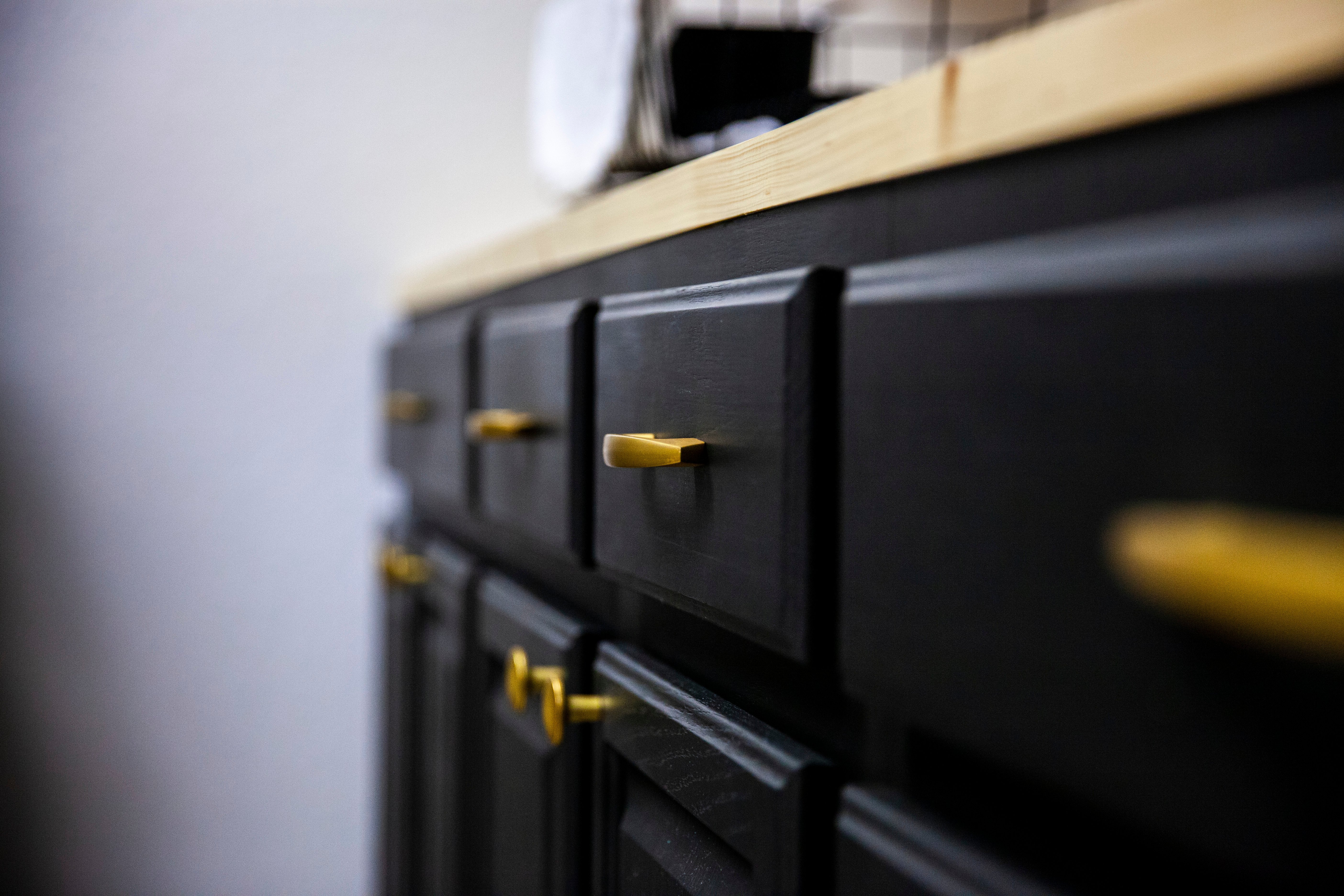 The KEEN talks in Ohio with John, Luke and our client Doug was a big highlight for me. These were a series of docu-style interviews promoting the KEEN organization. In addition to executive producing, I had the opportunity to run a couple interviews. It was awesome and we really put the "P" in partnership. From picking the client up at his home and driving the crew to three universities and back, to being flexible and changing the scope of the project after the first day of interviews, this was a very rewarding shoot. 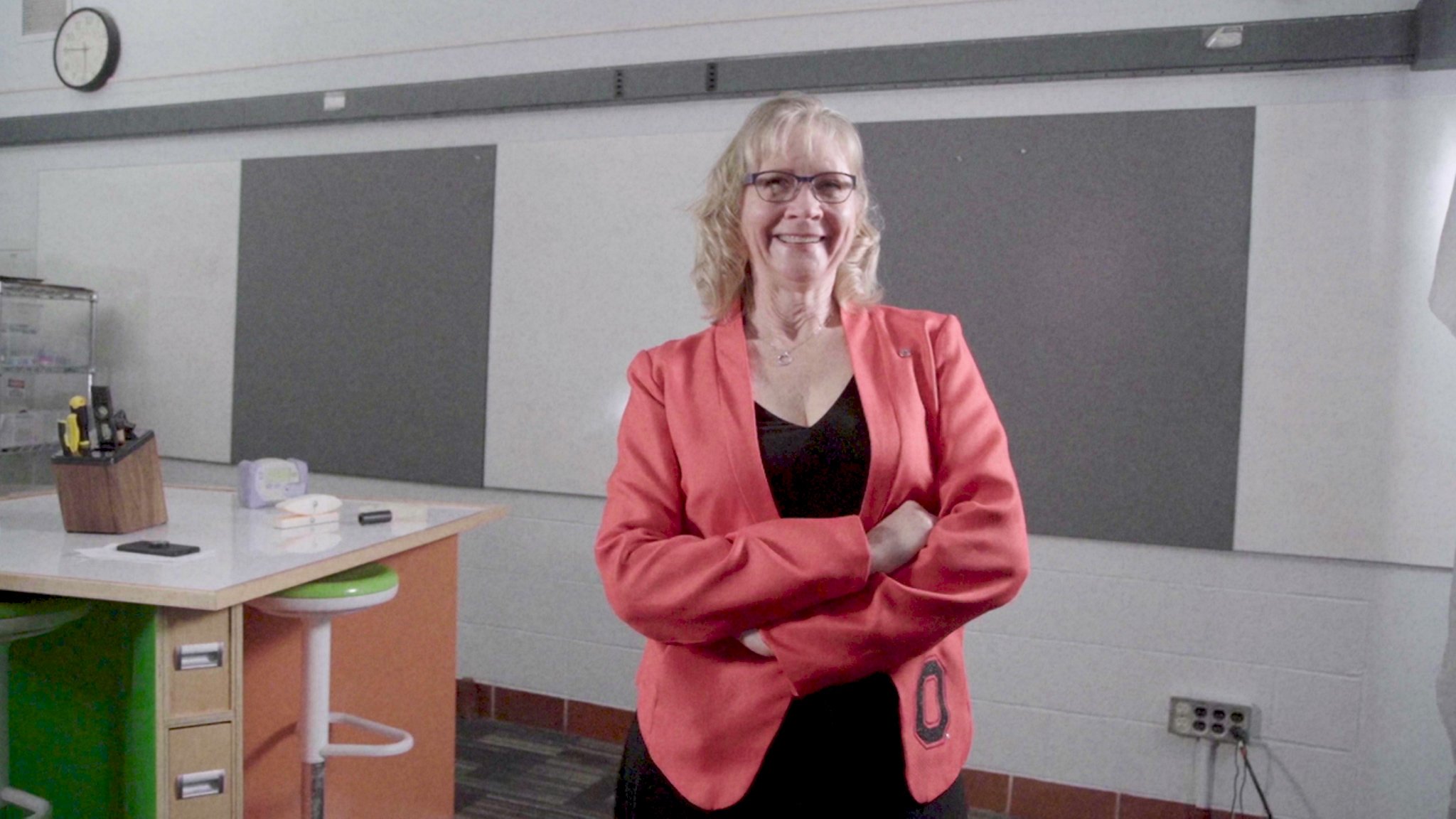 This is more of an internal thing, but something I'm definitely proud of. I've seen a great growth in our overall customer service, a project that has been very important to me over the last few years. As a team, we created an awesome customer service how-to document to help us in our every-day interactions. I am seeing people striving daily for high customer service and our partnership mentality. The Backflip way - Let's Backflip, right!

Safety videos are not something most companies associate with fun or entertainment. But we make it a point to have fun on every project and CEI was willing to let us push the envelope with a series of safety videos for their new employees. It was a rewarding challenge to find funny antics, for our comic relief talent to do, that helped emphasize the actual safety tips in the videos.

I probably won't be the only person to write about the short film we produced for a client. The pinnacle of a multi-part series on energy and community, this film featured dancers, electric vehicles, choreography, singing, and of course, energy. The most rewarding part for me was writing a script that moved the client and told a story that we are all proud of while still managing to weave the theme of renewable energy into the dialogue and action. This was also our first foray into custom music composition and lyric writing for a client and it turned out to be a wild success thanks to the talented Joshua Stromer. 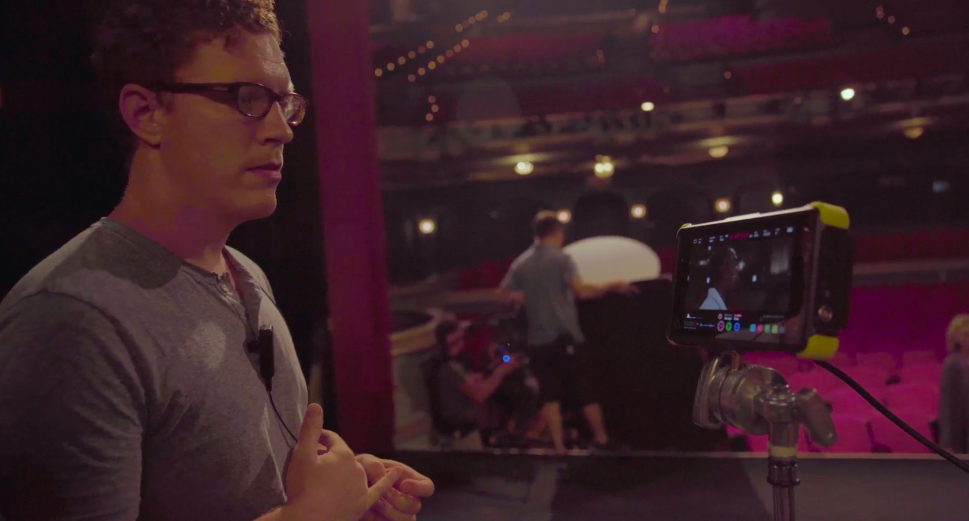 A project that I am especially proud of is an award-winning commercial spot I wrote, produced, and co-directed. It was the first spot I worked on that I wasn't just the producer. Our client, SafetyNet, approached us with a new product they were going to launch and needed content that would sell and excite consumers. They told us to come up with several creative concepts to pitch. We ended up creating a Dr.Seuss-inspired commercial spot that the clients loved.

2. You guessed it, a Short Film

Since it's a proud achievement for the company and many have already discussed it, I'll keep this brief (cue big breath).

Last August we shot a short film for a client that I produced: two shoot days, 6 locations, at least 100 people involved, 20 professional ballerina and hip hop dancers, 2 professional choreographers, 20 electric vehicles, annnd... like 200 pounds of food. I'm especially proud of this project considering the limitations it brought, yet I was still able to problem solve my way through it, ultimately pulling off a well-produced film that exceeded expectations. 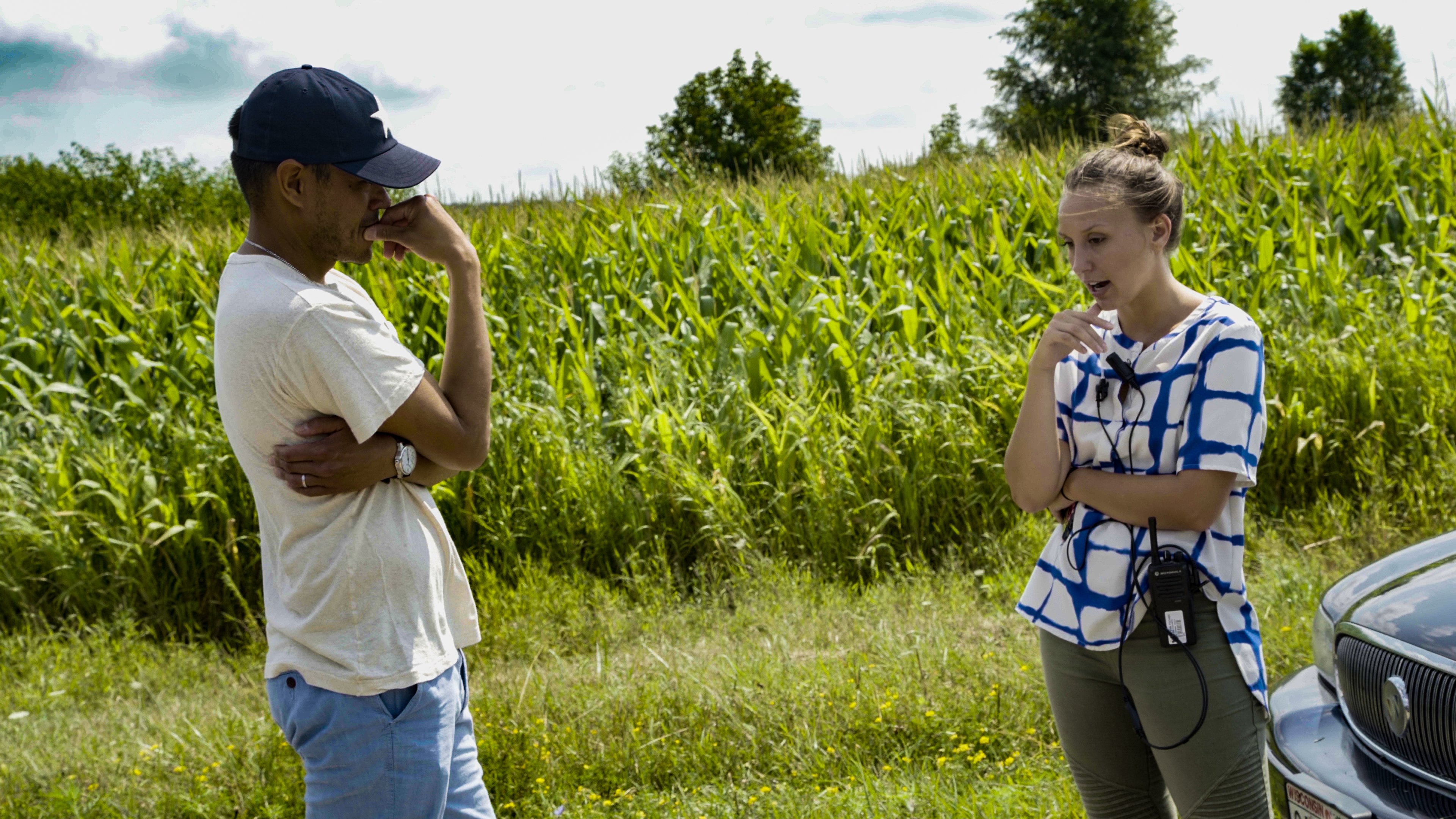 And accomplishment 2.5; though it doesn't have to do with film producing, it is excitingly newsworthy.

It was an amazing creative outlet for me to redesign a kitchen from a total sad office kitchen to an agency-level, super fab food lounge. I couldn't have done it without my left-hand man, jack-of-all trades, Luke Kolarsky (we are basically the Chip and Joanna Gaines of Backflip). 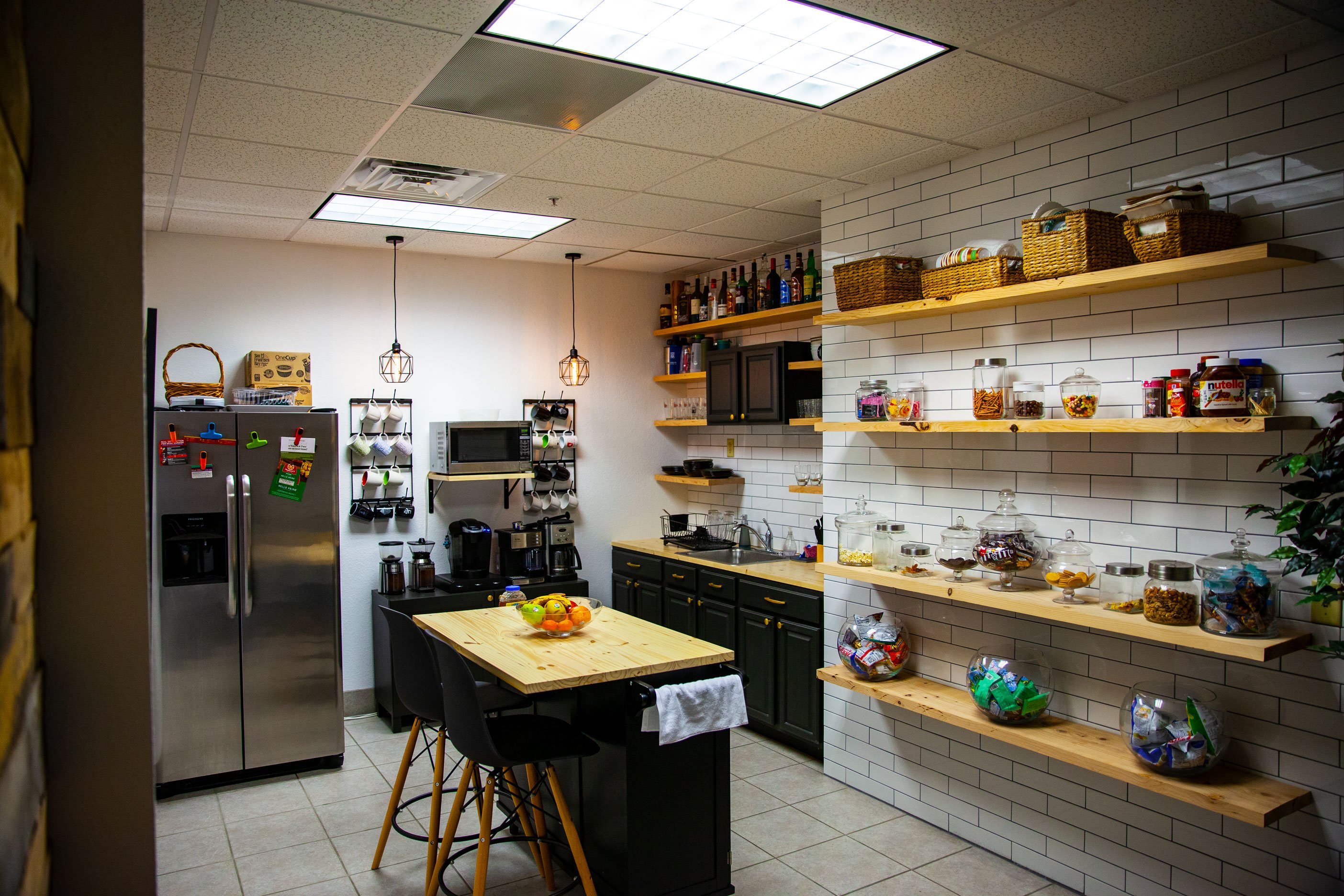 This entry was posted in Behind the Scenes, Design, post production, production, career development

← What I Learned from Studying Film: Part 1
You Should Give Away Your Best Ideas →