I used to be really into Dragon Ball Z  when I was in middle school. Also in high school. But only at the beginning. And kind of in the middle. Not at the end, though. Mostly.

Anyway, I was also really into drawing. Like...I had skills. And as every socially inept middle schooler knows, combining an interest in anime with drawing skills and too much hair gel is the surest way to scale the social ladder.

Be that as it may, I found some awesome tutorials on how to draw Dragon Ball Z characters on this thing called the internet. But the coolest part of those tutorials was the coloring phase, which involved the author using some elitist software called Adobe Photoshop 5.0. It was like Microsoft Paint on steroids. It was truly the Barry Bonds of art-focused software except that Barry Bonds totally never did steroids.

I couldn't afford Photoshop, though. At the time, Adobe was selling Photoshop for  $1B US, so I was priced out. However, they did offer a free trial download that had everything you needed except for the ability to save. This, of course, was ridiculous and would've demanded that you keep the program open for days and days to complete a drawing that you couldn't even keep. Needless to say, this was completely untenable and pointless and insane and I did it and I'm sorry Mom and Dad. 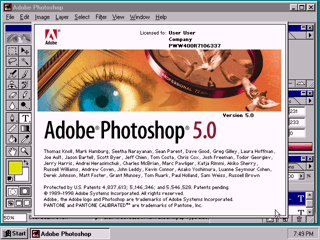 The Photoshop 5.0 splash screen. Such nostalgia.

This went on for some months before a friend of the family who knew a guy who knew a guy managed to send me a totally legit, 100% legal copy of the full version of Adobe Photoshop on a burned CD with "Photoshop" written on it in permanent marker. I was like a kid in a candy store. Or like a criminal outside a candy store that he just robbed. I'm not sure. But it was sweet.

With my newfound wealth, the world was my oyster. [Editors note: Phil's erster ;)] I was cranking out DBZ art at a dizzying rate. And by dizzying rate, I mean the same plodding, perfectionist-bedeviled "speed" that I work at even to this day. I think I made like 4 pictures.

But I loved it. And I was good at it.

And then I was embarrassed about it. And I didn't want to do it anymore because it wasn't very cool. And I mostly stopped drawing because that wasn't very cool either. And art was for weirdies with no friends, anyway…

I got to college with the intention of being a computer engineer. I loved the computer science classes that I took in high school, and was looking forward to a prosperous career of programming text-based games like Checkers and Connect-4. Unfortunately, between my senior year of high school and my freshman year of college, the text-based game developer job scene completely dried up and UW was forced to shift all of their courses from text-based gaming for children in the 1970s over to actual software engineering for grown-ups.

Of course, the time I wasn't spending on actual schoolwork was still being responsibly used. I discovered that students could avail themselves of the poster printing machines on campus to print giant posters for pennies on the dollar. Not wanting to lose money on a missed opportunity, I set my coursework aside and devoted the time I wasn't playing online poker to creating various poster and logo parodies.

I dusted off the ol' Photoshop skills and got to work. The formula was fairly straightforward—I would use Photoshop to recreate a graphic wherein I would replace all of the things that didn't have anything to do with me with things that did. For example, I recreated the UPS logo with my own initials, and added the tagline, "What can Phil do for you?" Classic.

This poster is iconic. Mine was legendary. Particularly among the dozen or so people that ever saw it.

I also parodied the iconic Scarface movie poster. I replaced the photo of Tony Montana holding a gun with a photo of myself holding a fork. I retitled it "Fatface" and gave it to my best friend as a gift. Needless to say, it was received really well. I think his parents especially appreciated having it hanging on the wall in their basement.

With the poster and logo projects piling up, it became more and more difficult to sate UW's unrelenting demands that I do things for which they awarded actual credit. I knew that I had to eschew my pursuit of enjoyment and get to work, so I set out to find a way to not have to do that.

It was then that I realized I could combine the best of both worlds and switch my major. To art.

I came to find out that some people, called artists, try to express thoughts and ideas or communicate the uncommunicable through visuals or sounds or experiences or some combination of those things. They have some desire to share some piece of themselves or some gift that they've been given for the betterment of the world.

In no way did I want anything to do with any of that, so I took as many design courses as I could that would encourage me to sit on my butt in front of a computer and mess with fonts.

And mess with fonts I did. I needed to. It's tough to recreate logos unless you know a lot about fonts. I also got really good at using Photoshop to make things look that way I wanted them to look. And then I started caring about making things look good. And then I realized that you can change peoples' minds about things by appealing to their sense of beauty.

And I loved it again.

The Other Shoe Drops

Sometime during my second senior year, I ended up in a web design course. It was fairly rudimentary and outdated, but what it lacked in relevance it more than made up for in ease, so it was perfect.

Everything was table-based and done in Dreamweaver, so you couldn't really do anything that wasn't as boring as watching the carpet. In order to do fancy stuff, you needed to incorporate something called Flash. The standard way to use Flash, like the standard way to use Dreamweaver, was through the GUI. You could draw something on the screen, move the timeline forward, move that thing you drew, and boom. Flash animation. How perfectly dull.

Flash at that time, though, had just come out with something called "ActionScript 3," which allowed for more programmatic customizations to the objects and tweens that you created. We dabbled a bit with ActionScript but it was mostly relegated to "more complicated than you can handle" status. The class collectively moved on.

I was the exception.

ActionScript 3, it turns out, shared many similarities with those programming languages I was using in high school to make Checkers and Connect-4. I came to find out that I was actually already an expert in ActionScript. It was then that the scales fell from my eyes, and a whole new world was opened before me.

Dude, bullets, it would be very uncool if you hit me so if you could, like, not hit me, that would be totally excellent. …Wyld Stallyns 4 Life!

I don't remember anything after that. I blacked out. I had no clue what everyone else was doing and I didn't even care. They were but monkeys banging on rocks with sticks while I had discovered fire. It was exhilarating, and I got addicted.

The story doesn't end there, because there was still a giant chasm between where I was and where I needed to be in order to earn an actual paycheck. However, despite my best efforts, I managed to find my way to a career that hits all the right notes for me. It's what I enjoy and it aligns with my gifts. It's a privileged position—one that I try not to take for granted.

And I love it.

We've all been given gifts. We all have strengths and weaknesses. It's not our job to choose them—we don't really have a say in the matter. But it is our job to figure out what they are, be honest with ourselves about them, and find a way to bring value to those around us by using them cheerfully and effectively. It's stewardship, and it's something that took me a good long while to figure out, or at least to begin to figure out.

Discern your gifts, and use them well.

This entry was posted in Website, Behind the Scenes, Design, Fun, Graphics