Give Thanks for Stories! 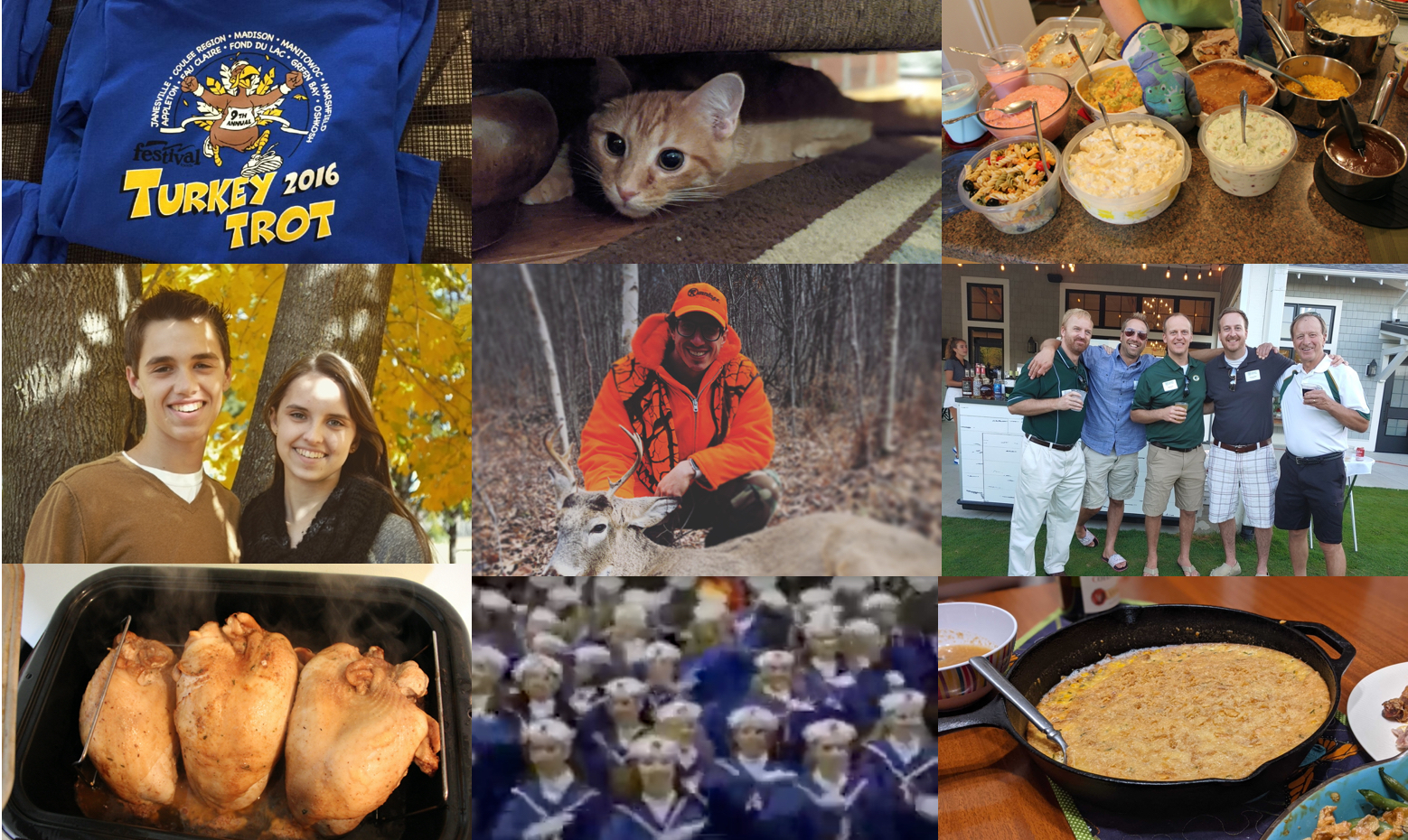 Thanksgiving. A holiday to give thanks. And eat. And watch football. And apparently shop.

Thanksgiving means a lot of different things to a lot of different people, but to me I think it always ends up being a good time to reflect. It could be because I'm trying to recall those things for which I should be thankful. Or maybe it has to do with the thoughts that float through my mind while in a half-awake food coma in the afternoon. Either way, we thought it would be fun to share some of our favorite thanksgiving memories this year. We hope you all have a wonderful weekend and enjoy some of our stories while perhaps creating some new memories of your own! 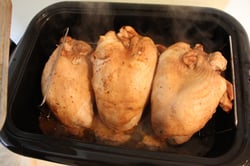 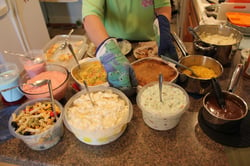 Every year growing up, my mom would love cooking Thanksgiving dinner for the family. As the years went by, the number of family members dwindled, but the amount of food would always stay the same. It reached a point where my mom was making 3 (three) whole turkeys for 6 people to eat, stating "people always like leftovers". And while that seems excessive in it's own right, the turkey's were in addition to the pound of mashed potatoes, a pot of sweet potatoes, three pies, green beans, pasta salad, sweet corn, deviled eggs, two relish trays, rolls, and of course a giant container of frosted cookies just in time to kick off the Christmas holiday. 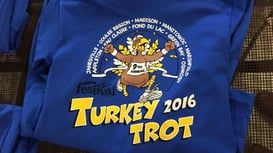 My freshman year of college, I came home for the holiday and volunteered at the local Turkey Trot with my brother Alex. Being 13 months apart, we enjoy hanging out together and grew up side-by-side. We were apart for the first extended amount of time when I left for college. While nothing special happened that morning at the Turkey Trot, I will always remember that time Alex and I got to spend together catching up and handing out t-shirts to the runners. 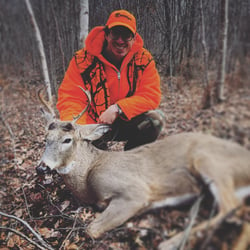 Thanksgiving can be such a wonderful time of year. A time to relax, recollect, and reconnoiter. (Points for the alliteration). For me, however, it is often a time to catch up on all the colds I've been ignoring throughout the year. In general, I don't get the cold or flu much. People will be sick four times before I get sick once. My intent here is not to brag about my strong immune system or my great hand-washing skills (it has to be something, right?), but to point out the main idea that I don't get sick very often. The exception, of course, is Thanksgiving.

My hypothesis is that all year I fight off any bug before it can take a hold on me because I have to. I'm married, have six kids, own and operate an agency with employees, and in my free time I do even more marketing and creative projects. Ain't nobody got time for being sick. When Thanksgiving rolls around, however, I have four days where I don't have the normal responsibilities and the events and happenings are pre-scheduled. I don't have to manage anything, nor do I have to think about what I'm doing. When my mind is free of the typical juggling act, I believe my body can tell and goes into full-blown sick mode for a day. I'm laid out in bed and sometimes miss the Thanksgiving meal. Perhaps this is my body's way of reacting to one of the most relaxing times of the year.

Whatever it is, I've spent about a day from eight of the last fifteen Thanksgivings, sick in bed. After that, I'm all refreshed and ready to enjoy the rest of the holiday. Weird, I know, but I love that I have family to take care of me when I need it. It's hard, but I think we all need to be taken care of from time to time.

What's that you say? Talking about sickness in a COVID world is gauche? Well then.. my favorite memory recently is from two years ago. I went hunting for the first time and got a buck and we ate some of the meat for Thanksgiving. I hunted for some of the food that we shared, that was pretty special.

This one feels like a bit of a stretch for my own personal Thanksgiving memory, but I think it's worthy of retelling anyway. When I turned 16, I thought it would be fun to have one of those classic huge parties like you see in the movies. I extended a nearly open invite to almost everyone in the school and many people showed up from grades above and below me. I tasked my good friend Zach with figuring out the rules to the  Rugby so that we could play that in our backyard in addition to the usual bonfire and hangout. We did, and had loads of fun! ("How is this related?" you're asking.)

About 4 years later, I was invited by an acquaintance from our high school to the 4th annual Thanksgiving weekend rugby game in Mayville at the park downtown. I'm not sure how many years it continued, but the random sport we decided to play in my backyard for my 16th birthday, became an annual Mayville tradition for many in our highschool for years after. To know I played a small part in a few sprained ankles, some broken limbs and at least one broken collar bone... well, it's the kind of thing that just makes you want to give thanks! 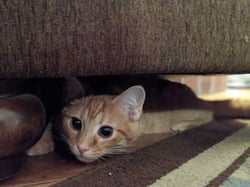 This thanksgiving tale involves the corn pudding I make every year and my sister-in-law's cat, George. It was early afternoon in Ohio and we were getting the table set for our big meal. Because there was so much food we were taking multiple trips from the kitchen to the table. My corn pudding was one of the first things I took. I placed it on the table and left to go get whatever was next. When I returned, green bean casserole in hand, I stopped and looked down at my once undisturbed corn pudding. There, outlined clearly in the corn slop, was a trail of kitten footprints. Because he is an absolute rascal I immediately knew it was George. Sure enough we eventually found him, hiding under the couch, licking the pudding off his little kitten feet.

I was 17, a junior in high school, and this Thanksgiving Day was one that I will never forget. I had the privilege of being 1 of about 650 sailors…erm, I mean dancers, for the Mike Miller Dance Team in the Macy’s Thanksgiving Day Parade! This dance group consisted of hundreds of dancers from studios all over the United States and my best friend’s studio was one of them, her instructor kindly allowed me to tag along (even though I went to another studio). We practiced our dance routine prior to arriving in NYC then spent the week leading up to the parade rehearsing with the other hundreds of dancers for hours each day. The morning of the parade we dressed in our blue sailor uniforms, white gloves, and red lipstick…with huge smiles on our faces and hearts filled with excitement we walked the parade route to Macy’s, waving at everyone watching us from their apartments high above the street and danced our hearts out for a quick minute on live tv! To be able to participate in such an iconic parade was something I will forever be thankful for and who knows, maybe one day I’ll go back a walk the parade again but as a balloon handler

(The only online proof of this is a poor quality video but the dance begins at 1:03:12:

One of my favorite Thanksgiving memories is when we still celebrated at my grandparents house. After we had all stuffed ourselves with food the whole family would head down to the basement for some overly competitive runaround ping pong. (I'm looking at you Aunt Marnie) It was all in good fun but one year I may or may not have slipped as I was running to hit the ball and punched a hole in my grandparents wall with my foot. Sorry Grammy and Papa!P.S. Don't worry, I came back the next week to patch and paint 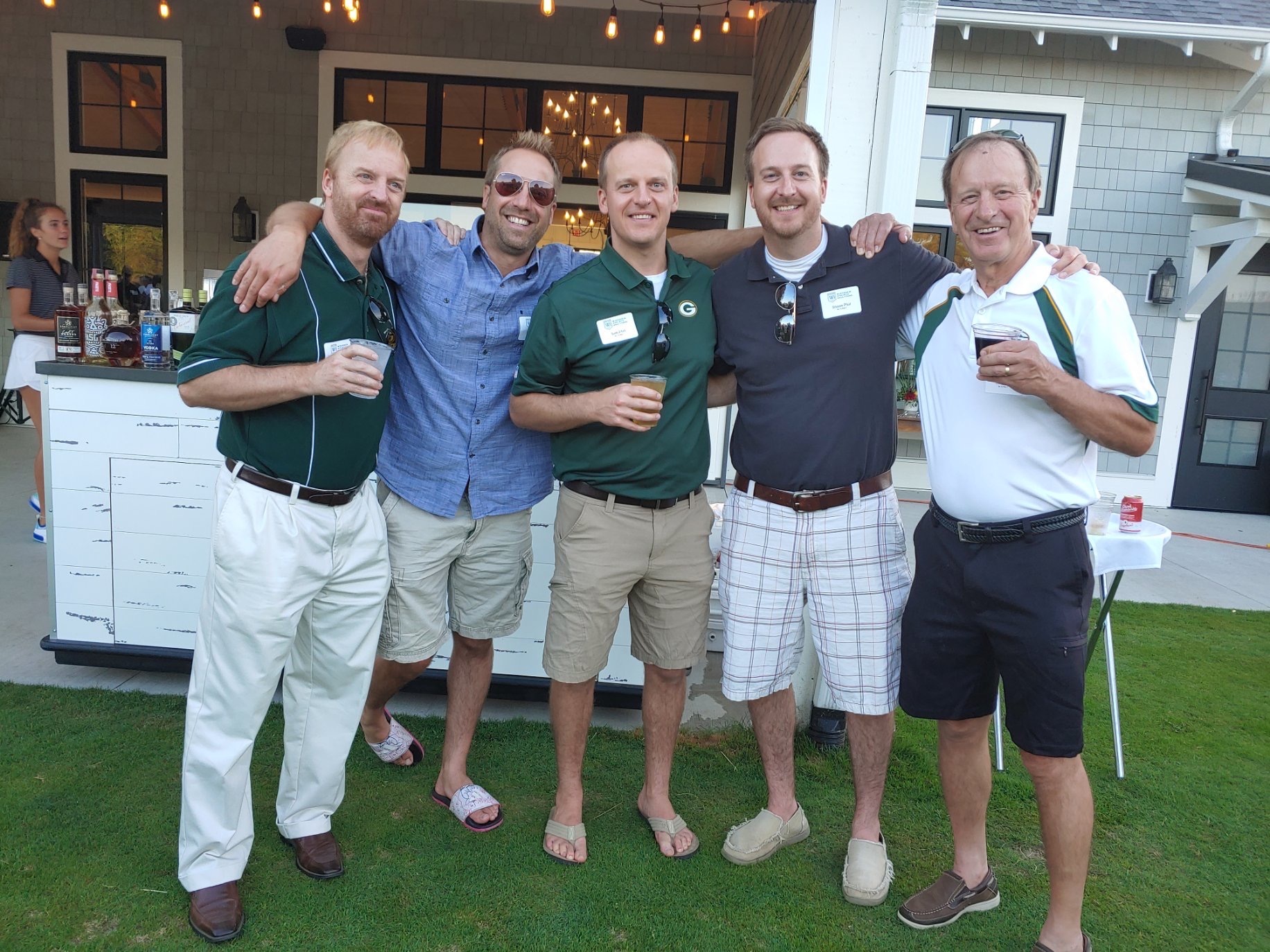 Fav Thanksgiving is our classic football matchup.  Brother versus brother.  We typically split the two small lefties vs the dumb, big, slow Pfeils.  2 vs 2.  One year things got a little heated, I MAY have taunted Steph after a TD and he tackled me (we play two-hand touch) so I got up fast in his face (what's the oldest brother supposed to do?!) and he promptly threw me down again and then a third time.  I think I mentioned earlier he was big, maybe I was the dumb one?  I did stay down the third time.  ANYWAY, nothing like the passionate competition between brothers that are also best of friends, especially when we are not on the grid-iron.  So thankful for my amazing family.