That was pretty cool, wasn't it?

I mean, did you see some of that footage? Especially any of the drone shots. It's a thing of beauty. However, did you notice the vocals placed through the video? A man talking about creative inspiration, and letting us help you make a product that we're all proud of. The voice-over artist did a fantastic job didn't they?

Except it wasn't a voice-over artist but audio from a speech given in the 1960's.

Okay, I know that didn't have as big of a shock value as I thought it would. For years, companies have been using old speeches to help drive home a point in their marketing. Tying your product or brand to a historically significant speech presents the idea of deep rooted strength and pride to the viewer. Causing them to connect the powerful message they're hearing and the visual they're seeing as one in the same.

Often times these speeches are classics like Martin Luther King, Jr.'s "I Have A Dream", John F. Kennedy's "Inaugural Address", or Ronald Reagan's "Tear Down This Wall". All of these speeches address the need for change and do so with a great power behind them. 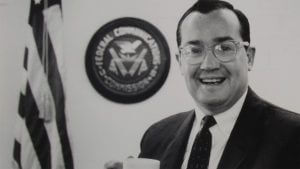 Newton Minow, former head of the FCC, & his morning coffee

So what about the speech used in our video? I doubt you've heard it before unless you're a television history buff or were at the 1961 NAB convention where it was originally given. The voice belongs to Newton Minow, then recently appointed head of the FCC (Federal Communications Commission) who gave it to a room full of broadcasters and television station owners. The lengthy 39 1/2 minute speech covers early television's lack of healthy programming.

Minow, who's from Milwaukee, WI and is still alive in Chicago, urges the broadcasters to consider better programming and to give the audiences educational and properly entertaining content. To not fill the air time with useless information designed to debase or dumb down the audience viewing it. Remember, television was still new during this time and most cities only had one or two channels at most (unless you were places like New York that had seven...yes! SEVEN WHOLE CHANNELS!)

We knew our work could stand on it's own without the need of extra voice over put on top of it. In the past our demo reels have easily showcased our fantastic clients and the outstanding, award winning work we've done for them simply cut to a fun piece of music. However, this time around we wanted to add a little more "umph" to the video and that's where this speech came in.

I stumbled across it looking for soundbites from an early Kennedy speech (yeah, I'll admit I was going the route so often used for projects like this). The moment I heard what Minow was saying to the broadcasters, I realized how much it's sentiment holds true for us and our work. We want to produce the best possible product for our clients, and we do so by going after a more imaginative, creative, and experimental approach.

We, like Minow, want our clients to know that it's them that hold the power to influence or inspire their audience. To inform and entertain, not bore them with an average presentation. To be willing to get a little creative with their branding and marketing materials and show themselves off as something different than their competitors.

I hadn't realized when I started editing the video that the most difficult step was yet to come. I had found a fantastic piece of music that harkened to the 70's with it's funk and brass driven tone and assembled a montage of beautiful work we'd done for our clients over the last two years. Then I stumbled across the aforementioned speech and figured it was smooth sailing from there on out.

How do you condense a 40 minute speech whose original audience was a room full of broadcasters and station owners living in the early 1960's? How do you edit the piece to under a minute without losing the emotion or tone behind it? The answer? Approach the audio like an interview you recorded.

The two pieces have a lot of the same elements to them, and much like an interview, you have to find the soundbites that are most relevant to the piece as a whole. The emotional comments, the powerful hooks, the ending line that wraps up the entire video in one fell swoop and makes the audience sit back and go "Whoa" with a smile on their face.

That reaction is all that any editor can ask for and can help the message of the video stick inside the viewer's mind.